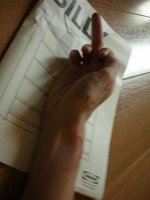 I was mauled today by Swedish furniture.

An unassuming Billy case lurched from its cardboard box, ripping through my forearm and punishing my toes.

Wiping blood from a faux chêne finish is simple enough. A newfound fear of IKEA, however, may not be so easily erased.

The first time I heard about IKEA was in the movie Fight Club. "What kind of dining set defines me as a person?" asked a soul-less Ed Norton while flipping through a catalog on the toilet.

IKEA hadn't yet come to Chicago, so it would be years before my first sojourn to the giant blue box. On that day, I came away cash poor but rich with all the barware that a graduate student could need.

Outside of one or two "experimental" visits, however, IKEA was never a habit while I lived in the States. The objects in my life came from thrift stores and alleyways. Dressers were found and re-finished, not ordered and assembled.

That all changed when we moved to France. The logic in shipping cast-offs across the ocean was questionable, so we sold the old lamps, wobbly table and velvet paintings.

We arrived in Paris planning to buy new, but there weren't many affordable options. Beyond IKEA was a world in which objects were either ugly, expensive, or undeliverable. Without a car or much money, we needed IKEA if we were going to live with more than an inflatable mattress on the floor. So we swallowed our consumer conscience and set out to fill the apartment with particle board.

In a single afternoon we ordered everything - bed, dressers, bookshelves, tables, and chairs. We waited for weeks in our empty apartment until the delivery company finally turned up.

I spent days assembling the lot of it, including a bookcase that was missing a third of its shelves. Those parts never arrived, and their sister bits were transformed into a kitchen counter. We swore we would never order from IKEA again.

Our next pair of bookshelves came from Conforama. Twice the cost and doubly fugly - they now lean dramatically to the side. IKEA cases may be shoddy, but they don't require kitchen twine to keep them from falling over.

The ban on IKEA was lifted last week to buy more shelves. The boxes arrived without incident and I found myself wondering why I'd ever made such a fuss. IKEA wasn't the devil, I reasoned. They were just a private "foundation" offering affordable solutions for better living.

That was before I was Billy clubbed - before I saw the hidden evil lurking within these objects.

I tremble now in my Noresund bed, wondering when the next attack will come. I scan the room and realize that I'm vastly outnumbered. IKEA has successfully infiltrated every corner of this apartment. Perhaps tonight I will sleep with the Kroby light on, or put a Herman chair in front of the door.

My soul, I see now, is not enough for them.

I have the Noresund bed too! and what an adventure getting it... cf: http://maitresse.blogspot.com/2005/02/woe-is-me-woe-is-my-mattress.html#comments

But now everything is ok and I lurv it.

A little blood is what it takes to shake one out of this benevolent embrace of the Ikea Foundation, no? But need I remind you, neophyte, that the first rule of Fight Club is you do not talk about Fight Club (esp. on blogs).

At least you had the good sense to have it delivered... Pikey* students do it on the metro. I never want to repeat that again.


* Pikey: Pejorative slang term used in the United Kingdom. Originally used to denote Irish Travellers, but in recent years has been used to refer to the underclass of the country, particularly those on whom the lower middle classes look down.

Ikea is a dangerous addiction. I for one, have suffered greatly. But Ikea has also saved my life, or atleast my apartment which was so utterly lonely without furniture.

What a great video! I feel the Ikea invasion...

This post cracked me up. When I was searching for an apt in Paris I was baffled to see every listing sporting Ikea furniture, something I'd always associated with the post-collegiate-before-moving-on-to-Crate-and-Barrel/Pottery Barn period. Now that I'm here I see the light.