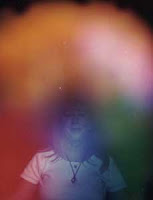 We parked the car at 9pm outside a low slung cement block building. After knocking three times on a window, a man wordlessly opened the front door.

Adam appeared as my boss had descibed him: short and stocky, like a sports trainer. Not so different than the other men I'd met in Warsaw. What set Adam apart was his brow line - two hairy thickets that twisted upward toward the flourescent bulb.

A man in a suit hovered behind Adam, his function unknown. The suit motioned for me to sit down, and Joanne silently followed Adam into the bedroom. After a few minutes the suit mumbled something in French. "Not many people from Poland in Quebec," he said. Then he stood up and walked out of the apartment.

Alone now, I could examine my surroundings. In addition to the bare bulb, there were plenty of other "mood elements." A television, muted, showing rugby. A phone that rang off the hook and a cassette answering machine. Decorative knives.

I heard footsteps in the hallway and then the flimsy door was flung open. Joanne emerged looking woozy, but gestured for me to go in. I followed dumbly and the door was closed behind me.

"Stand here," he said in French. "Close your eyes."

I had agreed to see the energy healer because my boss had offered to pay. She had her own appointment during my visit, and I was "lucky enough" to be added on. Adam had been in the papers recently, and was very much in demand.

At the very least, I thought, as he stood behind me doing God-knows-what, there is a blog post in this. And I began to imagine the opening lines.

"Am I?" I replied, imagining a serious poker face.

"This here," he said, passing open hands near my sternum, "is your (something-or-other) channel. Immediate family. Boyfriend, husband. Very ......"

The last word was represented only by a gesture. An anguished face, like he had stepped on something sharp. Or eaten Marmite.

"This here (moving southward) is your spirit channel." He spent some time pawing the air in front of my belly, and then moved on.

He started in about digestion and I had to call him back.

"Excuse me, Adam... my spirit channel? Did you, uh, find anything there?"

His impressive brow collapsed into itself. He started to say something and then thought better of it. He moved his hands down and continued to talk about intestines.

Parlor tricks followed, with Adam pointing to my physical ailments. He correctly named all the current ones (a bad cough, a sore back) and even forecast a few that "will follow."

He then told me to sit, and looked directly into my eyes. His face hung with the over-wrought sincerity of a high school guidance counselor.

"You're very sad," he repeated.

Isn't everyone? I thought. "But what about my spirit channel?"

He started again to explain, stopped, and then called for Joanne. He took her in the corner and spoke very quickly.

My mind wandered to various versions of this story - the sad expat learning that she has, after all, no soul. It could be done like Lost in Translation with good music, Polish art students, and sexy casting. Or in a Sci-Fi direction, with a vampire soul! Or...

"It's your third eye," someone interrupted.

Joanne was explaining to me that it's broken. My third eye. And that this is very, very bad. "It's the way you relate to the world. It's the interface between you and everybody else. Or something like that. We can Google it."

The good news, she assured me, is that Adam can fix it. Only 2-3 more visits, and only 15 euros a pop. I could be a much better person before the summer.

I came back to Paris last night, dropped my bags, and went to an Andrew Bird concert. And the dashing multi-instrumentalist peered out from beneath his hair-mop, looked right into my eyes (so I imagine), and sang:

Do you wonder where the self resides
Is it in the head or between your sides?

I decided this morning, after a proper night's rest and five cups of coffee, what this third eye business is really about.

It is not about me being soul-less. Or selfish. Or any other unflattering word that begins with S.

It is about grammar!

My interface with the world, like a radio dropped in water, has been cutting out. I am third eye blind mute as a result of speaking french like a six year-old.

My next trip to Warsaw is in May. This leaves me plenty of time to master the subjunctive and return triumphant to Adam's "office."

"All clear," he will say, brows twitching happily. My sternum will reveal that I am good.

A barking need for attention is easily mistaken for dramatic flair.

And so last night I was asked for the 100th time in recent memory, "have you spent any time in the theater?"

The answer is no. Apart from weekly classes in amateur improv, I have never sullied a stage.

I do, on the other hand, love to put on a show. And for my birthday last week I went a bit overboard.

I searched high and settled low in selecting the motif. I wanted a theme that people could get into.

And while my dream of turning the entry hall into a giant Slip N' Slide did not come true, les Folies Vaginales afforded an impressive array of absurdity. 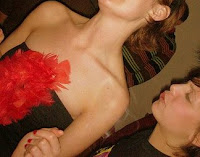 I spent a ridiculous amount of time in preparing this - feathering the apartment, slitting dates and stuffing them with marscapone, making labia garnish out of strawberries... all of the usual things that one does.

I sampled cocktail recipes while making my costume (above) and built a playlist of very nasty songs.

But nothing that I did (and I did a lot) could compare with what came out of the guests.

In the category of dress, the biggest surprise came from a pair of (gasp!) french boys. They donned homemade t-shirts labeled grandes and petites levres, and wore necklaces strung with bic razors.

Girls in every labial hue were monitored carefully by a British gynecologist. And there were more fur accents in that apartment than on a Croatian nudie beach.

But the audience participation was not limited to costume.

Some brought vaginal artwork. Others made labial folds out of ham. Music and videos, boxes of all shapes and sizes, pervy chocolates and candies, the list goes on and on... 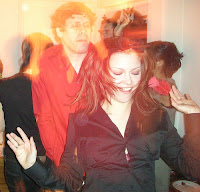 But the best form of participation is always dance. And people got down for the vagina. There was blouse-popping, booty shaking action under the nightie light.

Take this Dan kid at left: a soft-spoken intellectual type by day. Get a couple of kir vaginales in him and he's suddenly spinning Nardac like a top.

At the end of the night, following much drunken singing, someone made a musical vagina out of a vaccuum tube. You'll have to click here to see what I mean. 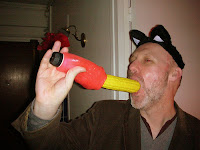 Something about the evening seemed to have put people in the mood. At least six (however temporary) couples were formed, and that's not even counting Steve and his friends here. I myself retired alone and happy around 6:30 am.

A vulvatic thank you to everyone who came. You made me a very happy birthday girl, indeed.

Form a line to the throne comments box because today, dear readers, is my birthday.

The day began with bright sun streaming through my window and crisp blue surrounding the visible sliver of Sacre Coeur. Birds - I kid you not - were warbling on the balcony.

My roommate had left a pot of strong coffee waiting, along with a spot-on funny gift. I drank it in slowly while making a new mix tape CD, quite content to be hookey from work. 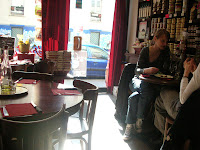 A date drew me out of musical solitude, and I set off to meet Catherine around 12:30.

A perfect assiette at the Cantine de Quentin, and then a walk along the shining canal.

Cath returned to work and I continued on to meet another girl. After four months apart, I wasn't sure what to expect from our reunion. My bike was waiting for me outside an Oberkampf pool hall, a little worse for wear but still beautiful. I hopped on for a wide-eyed ride through the city and then installed the bike at her new digs in Montmartre. 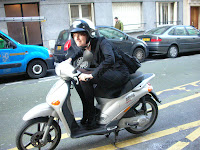 I later transferred my fesses to Nicole's scooter - a machine that always makes me feel like a teenager. There was much "wheeeee!!!" as we rode over for cocktails near Abbesses. And there was much gossip to accompany our kir.

I haven't even told you about the Vagina Party yet, have I? The one that spawned at least 5 (however temporary) couples? The one that left me exhausted at 6 am amid a pile of red feathers?

That'll have to wait.

After 5 consecutive nights of stuffing my gullet, I am calling it an early night. Perhaps tomorrow, after some digestion, I can be clever again. For tonight I'm just pleasantly stuffed. And quite grateful to friends for the filling.

I shall leave you with this hopeful message from the Onion:

After days of grave and anxious discussion, the stars have decided that it's better you don't know.