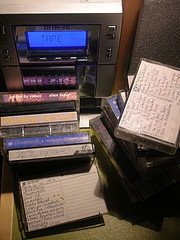 I rearranged the boudoir last weekend and discovered a box of mix tapes under the bed.

Do you remember the mix tape?

I'm listening now to "Mix Tape #1," which was given to me ten years ago by a bearded poet in Arizona. I can barely make out the song list now, but know from repetition how every song melts into the next. Disorientation sets in if, out in the real world, a particular Built to Spill song isn't immediately followed by Refrigerator's "Colton."

I've been putting a lot of my music on the computer lately, devising song lists to distract my culinary victims. It's not the same, is it? A mix tape was always heavy, there were choices involved. You couldn't fit everything on it - not even a fancy 90-minute tape - and the order was incredibly important. Putting 72 songs on random feels, by contrast, a bit cavalier.

The advantage to computer music is versatility. This is important in Paris because I can no longer predict what people will like. The tastes around the table may range from Fado to German electronica, from Brit pop to Django Reinhardt. I can't put on GBV after a night of drinking and expect folks to know it, much less pump their fists in the air (Loretta, you are missed).

So we experiment, all of us, with eachother's "international" music. I try the Mountain Goats with one country and get Die Sterne in return from another. Half of it I like, and the other half I hope to learn to like.

But on some nights, when every fiber is sick of growing, it's great to just kick back and rewind with a mix tape. To conjure, with the help of Uncle Tupulo, the known but long ago world where real men wore hoodies and drank Old Style - where Converse were universally filthy.

Does that not sound like paradise? I guess you had to be there.

Yes, and sometimes it's going from Mahler to Hank Williams I, but that's also just going from their apt. to our apt.
Yes, I remember that paradise well. I miss it. Is paradise like a superlative? Or might there be paradises? I'm hopeful.

I'm so glad to see someone is paying homage to the mixed tape. I have thought for quite some time that the mix tape is an art form in and of itself that has no equivalent in today's MP3 technology-focused universe. Like you said, the mixed tape was heavy. It was limited, no 5000 song playlists allowed. It was not quite as permanent as the mixed CD, but once it was recorded it could not be altered without great difficulty. You would either have to re-record the whole tape, or find a song that was exactly the length of the song you wanted to delete (not very practical). Plus, there was the whole issue of having to make sure to have enough of a pause between songs, something that is now done automatically.
Moreover, making a mixed tape for someone really meant something. You would make one for your best friend or for someone you knew who was moving away so that they would remember you. It's not the same as creating a playlist on itunes. You would spend a whole evening making a mixed tape, and then writing all the songs that were on it on the sleeve, and maybe making a little drawing or a little message to the person you made it for. Planning for a mixed tape for someone would take days or even a few weeks.
I've saved all the mixed tapes that have been made for me over the years too. There is something really special about them, and listening to them really brings back a lot of memories.

I recently got rid of the mixed tapes of my youth. It was a sad day but I don't even own a tape player anymore. I guess it was time to move on.

I miss the mix tape almost as much as I miss Le Meg. The downstate Bonobo cake leaves a great deal to be desired. Plus, no one wants to hear the sound of my balls flappin' against their ass here. Perhaps we should move to Paris?

You hauled mixed tapes over to France¿

I'd haul mix tapes across the ocean. In fact, I have done so.

I made the car dealership replace the CD player in our humble saturn with a CD/tape player, specifically so that I can dust off an old mix tape every once in awhile and take it on a road trip. There's no better road music.

Miss Tango in Her Eyes: I understand neither your name nor your comment. OF COURSE I brought mixed tapes to France! You are redeemed, however, by the empenada photos on your blog.

E: If what Feral Mom has said about you is true, you must have made some awesome mixed tapes in your day. Now, can you please testify that Feral Mom is not in fact the secret identity of my husband? Some readers mistakenly think that he's the only one who could possibly speak that way to me.

Hooray mixed tapes! I grew up with mixed tapes handed down to me by my older sister. I still have them all in a box somewhere in Canada (I didn't haul them over the ocean).

I think the CD/MP3 mix is just as good, as long as you're sufficiently disciplined to listen to the songs in the order they were intended!

As an aside, http://www.artofthemix.org/ is a fun place to visit...