As a downwardly mobile refugee from double income, I've been trying lately to improve my financial outlook.

Being disinclined toward sugardaddies, I've instead found a way to cut expenses. I have become, in the fullest sense of the word, a mooch.

Various dictionaries define a mooch as someone who "wanders aimlessly," "begs," "sponges," and "accepts gifts and favors."

I think that about covers it.

What's surprising to me (and baffling to my friends) is how well this has been working. I decided several months ago to try, just for the hell of it, requesting some free passes for exhibitions and music events. I was doing a calender for Expatica and couldn't afford to see everything I was writing about. 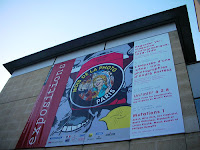 I'll never forget my surprise the first time someone said yes to me, and then how nervous I became at the prospect of approaching the ticket window. "Is it sur la liste?...or dans la liste?...or is list masculine??"

Eventually I got over it and got inspired to try for more. I started writing for Parisist and eventually editing their Events section. This is where began in earnest to build my kingdom of mooch. I started working with the editors and some fine staff writers to develop the FSS (free shit strategy). We banged out a request letter in two languages and I set about to begging.

Hundreds of emails have since gone out to clubs, promoters, labels, and the bands themselves. The result is that we have passes to a whole slate of concerts over the next few months.

There have been some let-downs (Clap Your Hands did not Say Yeah) and we're still waiting to hear about some big ones (Arcade Fire and the Shins), but overall it's been working surprisingly well.

All of this is good for Parisist, but more importantly it's great for me. I've been out having fun desipite a startling lack of funds.

Last night I had 2 passes for the sold-out Decemberists show (review here), and even scored a pre-concert dinner from Catherine. Not a bad deal, I say.

All this mooching can be exhausting. I turned down Guillemots tickets on Monday (reviewed by Alex here) and Rufus Wainwright tickets on Tuesday (reviewed by Lauren here). Tonight is another freebie, however, and Monday will bring a Tobias Fröberg show and interview (my first).

Perhaps I can develop a whole series of indie rock interviews that incorporate my expertise in reproductive health...

Last night a crack team of operatives set out for reconnaissance around Châtelet. We had a list of 5 karaoke establishments and no idea if any of them were good. "At the end of this night," I promised, "we will be the Karaoke Experts of Paris."

Our first address was showing a football game. The second had transformed into a Japanese restaurant. The third was now Lebanese. The fourth had simply given up, and the fifth required an hour wait before its opening.

We settled in at a lesbian bar to wait for karaoke and the arrival of a support squadron. Second lieutentant Samantha had promised to bring in some "professionals." When they arrived, we mounted our attack upon the joint across the street.

L'Annexe revealed itself to be a sad little basement with a 12 euro cover charge. As Rhino observed, karaoke in Paris is considerably more elusive than a club échangiste.

Crushed, we retreated from the karaoke battlefield and set out on foot for a party near the Canal. We pillaged along the way, unleashing our pent up musical energies upon the sleeping residents of the Marais. After working our way through several not-so-golden oldies, we made a big finish with this bit of artistry from the Sound of Music:

As the Reverend Mother from that blessed musical once said to Maria, "Whenever God closes a door, he somewhere opens a window." Last night's mission was not a defeat. If we hadn't been turned away from FIVE supposed karaoke establishments, the Roaming Club Karaoke (RoCK!) would never have been born.

*Note: the videos featuring my voice and facial distortions will remain carefully guarded. But the many others featuring Rhino and Christina are available for free and upon request.

I revealed in my last post that I had fallen in love with a dancer.

Sadly, however, the bouncing boy has not been in touch.

Or (unlikely) does not read my blog.

In any case, I am fickle and have fallen for a new toy. My heart this Wednesday belongs to La Blogothèque.

They say the best way to learn a language is between the sheets. But "they" haven't been practicing their french on this website.

In reality, la Blogothèque is much better than a boyfriend. He's always up for going out, I like his friends, he brings me new music, and I don't have to shower after visiting him.

Some places he has taken me:

(along the Canal St. Martin)


Not a bad couple of dates, right? And I didn't even have to shave my legs.

I Have Found My Valentine

...and need only to make him mine.

What enthusiasm! What MOVES!!

This man is my destiny. I just know it.

The following greetings from Meish will remain on standby, however, just in case I can't manage to track him down before Wednesday: 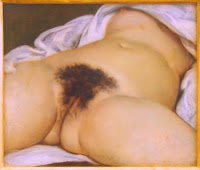 I am having, dear reader, an identity crisis.

This isn't about my crumbled marriage...

Or about wondering what I'm doing in a foreign country where I can barely speak the language...

Or about deciding whether to write a dissertation or more concert reviews...

I thought I was being clever when I named this thing. Blague (meaning: joke) sounds like blog - isn't that funny?

It may not be funny, but it sure is annoying to the frenchies. I have been questioned in a surprising number of encounters and emails about why I would use the masculine form to describe myself. More properly, I am a blagueuse. But blagueuse sounds like something that's smearable. And what's more, it doesn't sound at all like 'blogger'.

A second problem with the title is correct spelling. Nobody (including me) seems capable of properly spelling blagueur. I go by Meg to avoid gaffes with Meagan. Should I similarly re-christen Le Blag?

These are minor considerations, however, in relation to The Twat Factor.

One of the other four nominees for Best European Blog is "My Boyfriend is a Twat," and her victory for two consecutive years has spawned a new blogging principle. A friend explained The Twat Factor to me last week, saying that there are certain words that make people smile, click, remember, return, vote, discuss, etc. 'Blagueur' is apparently not one of them.

She wants me to rename the blog "Paris without Pants" (in the British sense) for my failure, at times, to wear undergarments.

I think I'm stuck with the original name. But let me just say: I can't believe, with all my talk about vagina, that the nominee with the word twat in her title is not me.

I am seething with jealousy.

Gratuitous crotch shot courtesy of Gustave Courbet.
See it in person at the Musée d'Orsay.