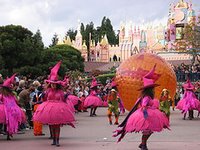 Evidence of Halloween is paltry today, not a ghoul or a goblin to be found. I don’t blame the French for not getting into the holiday – it makes no sense from their perspective.

Logistically, Halloween is a nightmare in Paris. School-sponsored events are out because the holiday falls during a mid-semester break. No Halloween parade for the kids to show off their costumes. No thematic cupcakes, no dry ice.
Trick-or-Treating, the raison-d’être of Halloween, is ruled out by building security. A child without a door code cannot enter from the street. Thus, the doorbells are not rung and the threats are not issued. The candy is purchased and consumed in moderation.
The cultural differences are more glaring when one considers Halloween for adults. Dressing up in costume is not just child’s play in the States. Some of my best holiday memories involved university parties, a hasty get-up and even hastier hallway kissing.
Costumes for adults fall into one of the following categories:

Most of my costumes fell into the third category and enabled a range of irregular behavior. Dressing as a bonobo allowed me to demonstrate my ape calls and hump assorted legs. Dressing in foliage and carrying a scythe enabled me to make a political statement...or at least to try (“I’m a Bush. Get it?”). Dressing as Mr. Hankey the Christmas Poo gave me the freedom to leave little brown smears all over a friend's apartment.

Parisian adults are more limited in their choice of costume. “Trying to be sexy” is not a once-a-year frivolity here. “Trying to be ugly” is just out of the question. Clever is good, but not at the expense of decorum. Dressing oneself as a turd? I think not.

That leaves #4: Not Trying. Parisians making an effort will simply accessorize.

Others will reject the holiday kit and caboodle, deriding Halloween as an imposition of Anglo-American culture and commercialism. They’re not wrong. In absence of trick-or-treating and costumes, the only visible signs of Halloween can be found in Happy Meal boxes and at Euro-Disney.

In this context, I chose boots for Halloween. And also tights, a knee-length skirt, and fitted shirt. I put on a scarf and brushed my hair, looking for all the world like a Parisian.

It is, after all, the day to be something you’re not.

Crap! Your university sounds a lot more fun than mine. I saw one zombie on my way to a music mid-term. Damn interdisciplinary art degree.

I'd love to see some Zombies make out in the halls.

Even though my house is decorated and I will be finishing my Frida Kahlo pumpkin this evening, I've opted for a goth (purple and black) appearance and no costume.

Goth can be Parisian, non?

The best we managed to come up with is to go get drunk and watch the football. I don't feel very Parisian... But then again I've yet to buy my black leggings and shorty shorts.

Halloween! So many memories, so many stories!

I'm out reading Halloween related posts by expatriate bloggers...and putting the links to them on my blog.

Ha, I just wrote a post about how my recent Halloween costume fell into your category one. And boy did it fail by the end of the night!

I would much rather dress up as a Parisienne. :)

Our local bar hosted a Halloween party Saturday night. All the notices said that costumes were to be worn, or else!
We arrived, in costumes as instructed, and wouldn't you know it...every single person in the bar, including the owner, was costumed in everyday garb.
Sigh.

I had three kids come by my apartment! They weren't dressed up, or anything, but at least they got the "donnez-nous des bonbons ou on va vous jeter un mauvais sort!" part right (i.e. "trick or treat!").

I considered explaining the costume part of the exchange... but I figured that their night of candy extortion was going to be hard enough in Paris. So I gave them huge handfuls of candy from the enormous bowl beside my door.

Their experience isn't going to be anything like the magical Halloweens of our childhoods...

I seriously hope there are pics of the bonobo costume.

As for dressing like une vrai francaise... I think a zombie costume would be less trouble.

Well it seems that masking his personality no need halloween, i know is it sentimental for you yanks, but i really fancy web blog, it's halloween everyday god's make, living into a Shkyso sociaty don't bring any envy to mark this day, especially in Paris where any peoples have a megalomaniac way of life, don't ask them do reproduce what they are deeply into persona for centuries!

I once went as a triangle. Ugly, sexy and clever.

that halloween outfit sounds quite scary enough to me!

This comment comes late, but Im new here, so gimme a break.

I thought Id share 2 costume ideas-- category 3 costumes--that I have been to embarassed to actually go through with, so I shall pass them on here

The first simply requires a pig snout (to wear on your face) and a blanket (to wear around your body)making you a...(can you guess it?):
Pig in a blanket

The other is putting devil horns your head and then making a make-shift globe or ball around your body and covering it in white felt or cloth and then gluing a yellow cirlce somewhere on it, making you a...:
Deviled Egg

Perhaps one year I will think of a costume that is worthy of wearing, but so far that's the best I got.

P.S. Love the blog--the humourous observations, experiences, and encounters are a wonderful distraction, keeping me from my studies. =)