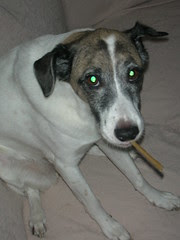 I must have been asked this question two dozen times: How does the dog like Paris?

"Her french is coming along," I usually respond. But in truth, the hound seems quite happy here in the city of light sidewalk droppings.

Mirth, a name that rolls uncomfortably off the french tongue as Murt, is our ten year-old dog. Securing her entry into the country was no easy matter. France is not as strict as the Commonwealth countries that require quarantine, but she (and I) did have to jump through a number of hoops before getting on the plane.

The first requirement was identification through either a tattoo or a microchip under the skin. Mirth has the microchip, an electronic ID that’s read by passing a hand-held scanner over her back. As a precaution in case it’s also a listening device, we hold a pillow over her back whenever talking politics.

The chip was done by a Boston vet who also completed her rabies vaccination certificate. All together, this cost around $200. In addition, this paperwork required the stamp of a Government-approved veterinarian. There was one such vet in Massachusetts. Having already sold my car in preparation for the move, I persuaded a friend to drive me across the state to spend the day in a puke-colored waiting room. Uncle Sam’s Vet charged $100 for the privilege.

After all this, Mirth was ready to be crammed into her $100 plastic cage. Her $200 flight from Boston was relatively short, six hours, but she emerged from the plane’s hold with some serious psychological trauma. I know, I know - it sounds ridiculous. But she was shaking and yelping continuously during our first two weeks here. A French vet gave her tranquilizers, and over time she was able to forget the plane and to focus on baguette.

Which, it turns out, is her raison d’être. Unable to work in France, Mirth spends her days lying around the apartment and dreaming up new ways to steal baguette. She will climb the kitchen counters. She will lunge at dangling loaves on the sidewalk. She once circled the stash of a homeless man before being dragged away by her apologetic owner.

The french aversion to scooping poop is Mirth’s second favorite reason for living here. Markings everywhere! The sidewalks provide enough canine gossip to keep her mind busy for the rest of the day.

“No she didn’t! That bitch peed on top of my mark!”

“Mmm, that sexy German Shepard has been sniffing around again. Do I detect a faint whiff of baguette in his urine?”

I, too, enjoy her walks. It brings me into contact with neighbors who coo over her, ask questions about her race and sometimes offer a corner of their baguette. Shop owners will sometimes allow her inside and offer a little something to eat.

The only real drawback about Mirth in France is the dog hair. Her endowment wasn’t such a problem in the Midwest, but the french seem less comfortable with hair as a fashion accessory. As a result, we spend an awful lot of time vacuuming and rolling our clothes. And still nine times out of ten my black jacket is covered with a hundred tiny white hairs.

I wonder sometimes if, like other children of immigrants, Mirth is ashamed of me. I try to see myself through her eyes when we meet her friends on the sidewalk. What must she think of her American mother - covered in hair, clutching a plastic bag, and speaking with that accent?

“MOM!! Do you see any of the other moms picking up poop?! You’re so embarrassing!

One of my favorite memories of being in Paris this summer was coming back to your apartment to find small pieces of a baguette all over your floor. I think I'm still finding small hairs in my clothes too! I love the Mirth!!!

I can't help but ask, even with all of your wonderful musings, how is it that Mirth appears to be smoking a cigar? Is this a new habit that she has developed since coming to France? Funny, I thought the tolerance for smoking--even among dogs--was waning. And tell her, it will absolutely ruin her sense of smell!

P.S. Okay, I'm sure it is really one of those chew thingies that dogs love, but I couldn't help myself...

Your puppy is so cute! And to think, she is a shifty-eyed baguette burgular!

As the proud owner of a long-haired, diva cat, I feel it is a badge of honor to wear pet hair to every occasion. I have to or my cleaning bill would be outrageous.

Your dog is an alien. It was switched onflight, the green-lazer-beam eyes that are a dead giveaway. Spray some water and it and see if it yelps. Aliens hate water.

But, picking up Alien poop is very cool. For that you get serious points.

Having a dog is the best way to get to know people... I didn't know any of my neighbors in our town, until I got Bandit... Now when we go on the evening walk, it can take up to an hour!! Happy to have found your blog!