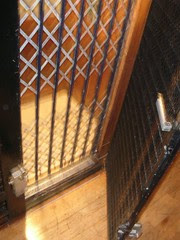 It was love at first sight when I met her in the lobby. She was slim, well-adorned, and complicated - like every other Parisian girl I would come to know.

Ellie's slender shape is what originally caught my eye. She's tiny, accomodating only three French or two American riders. Four have been known to ascend, fuelled by hope and red wine. Four have also been known to get stuck.

Pull back Ellie's glossy black outer door and there's a golden retractable gate. Once inside, her buttons must be pressed delicately and held for at least a few seconds. She will tolerate no thick-fingered jabbing.

The list of other things that Ellie will not tolerate has grown over time. There have been minor tantrums and strandings all along, but our real trouble began last winter. Without warning one day she refused to come to my floor. No technician in the world could convince her to return to me. There was nothing to do but get out at 5 or 7 and walk.

I'm not the only tenant on the outs with Ellie. More recently she has refused, following a fight with the conceirge, to visit the lobby. This creates the odd necessity of climbing up one flight in order to ride for 4 or 6 and then walk one. Try explaining that to a visitor.

With all of this drama, my legs have understandably started to wander a bit. I've been sneaking around and climbing the stairs behind Ellie's back. It makes me feel better about myself, less dependent. The more I climb, the more I realize I don't need her anymore.

We both know that it's over. And yet last night - when it was late and I'd had to much to drink - I found myself still wanting to be inside of her. Ellie opened up and took me in without a word. We moved silently in the dark as if nothing bad had ever happened.

Call it a breakup ride.

You are such a romantic...

You don't by any chance live at 20 rue de Rochechouart?! I swear that you are talking about the elevator in my old building.

I also had the task of trying to alert visitors to the delicate temperment of the elevator, and it seemed like most people thought I was being a bit drama queen about it. To their detriment, I should add. One weekend I left town and offered the keys to my sister, since she had some friends visiting. After a big night out, they all decided to have a final drink in my flat. Two of the visitors went up first. The last four decided that they would just squeeze in. Naturally the elevator got stuck in the worst position- only about a quarter of the way up between floors,but since 20 minutes of yelling brought no help (most of the building was offices) and the emergency call button apparently didn't work, there wasn't much choice. They had to try and boost someone up to open the door and then squeeze out of the space left between the ceiling of the elevator and the floor. It was next to impossible, but finally everyone was out. Of course, the worst of it was that after all that, they still had to walk up to the 7th floor, drunk.

I read your entry and was all nostalgic for my old flat. But actually, it was a real pain in the ass walking up and down those 7 flights because of the stupid elevator.

I would kill for an elevator as I live on the 4th floor. I try not to be crabby about it but, when I'm tired, it is a real drag.

what a lovely post! i just recently discovered your blog and have been enjoying reading it. very jealous that you're living in paris!

Lovely site - this post reminded me of a curious little lift in a hotel in Crete. Imagine if you will me, my 6'5 hubby and our luggage smooshed inside a 'vator half the size of an airplane toity. Perhaps we are toooo American. We laughed - between stifled breaths - the whole way up to our floor.

What a marvellous post! And as Sam Levenson once said - 'If you die in an elevator, be sure to push the up button'.

this is HYSTERICAL! bravissimo!