The Top 10 Concerts of the Summer

Between now and mid-July, there are more than 40 great indie pop/rock concerts coming to town. For music lovers living and traveling in Paris, this Gridskipper article features videos for my favorite 25 shows. The Top 10 are reprinted below for your viewing pleasure. Enjoy!

When I visit the U.S. I am invariably asked about if I plan to stay in France.

"Who knows?" is usually my watery reply, along with "probably not forever." I tack on that last bit to soothe the Americans who are hard-pressed to understand why I've strayed.

I then usually try to explain why I like it "over there." Few among my people have visited, and they're not the sort to squeal about macarons. I've had little success in stammering about the simple pleasures of Paris. I suppose I'm afraid on some level of being insulting or, even worse, being tagged as an elitist. It is hard to extoll the virtues of fresh markets without seeming to judge the Costco member across the table.

I will turn to my camera then, to do the job of illustrating why I like it here in Paris. These are images from my first week back in the city after visiting the U.S. 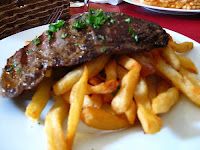 
It's an idyllic view, to be sure, and not always so lovely. But such was my week, and I am happier than ever to call Paris my home.

Notes from the Jet Lag Lounge

My very confused engines started racing at 3am, and there was nothing else to do (after last night's dishes) but finally sit down and write a blog post.

I used to brag about my immunity to jet lag. No matter in which direction I had traveled, no matter how much coffee consumed, I was somehow able to sleep on command. This talent was developed, along with many useful others, while working the graveyard shift at a Kansas diner.

That, however, is a different story, and a seemingly moot point. Because the 'Sleep Whenever' trait has reached its expiration date. I now belong to that unfortunate camp of people who find themselves awake against their will at absurd hours in the morning. The breastfeeding and menopausal, plus me.

One week is a silly amount of time in which to visit the United States. I arrived at my mother's and spent the first three days in a haze, waking up in the wee hours and sleeping again at the first sign of light. Near the end of the trip, my body adjusted. I became very briefly delightful and then boarded another plane.

Now I'm counting the minutes before I can mount a Vélib' and head over to Au Duc de la Chapelle. My sleep-deprived mind is finding poetry in the idea of pedalling to the Best Baguette in Paris as it is pulled hot from the oven.

But will Anis Bouabsa be pleased to find an American sleeping on his bakery's doorstep? There's only one way to find out...