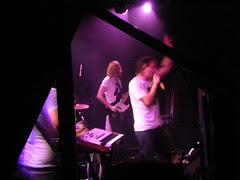 I was conscripted last night into the ¡Forward, Russia! army. Headlining Inrocks Indie Club 11 at La Maroquinerie, these DIY darlings from Leeds put on a sore-neck performance to remember.

It's difficult to choose just one crush from the band - Katie Nicholls on drums was very persuasive. But the singer Tom Woodhead made Le Meg's little head spin around.

His voice never wavered as it moved between Thom Yorke trilling and gut-bust bawling. He would wrap himself in the mic cord - turning pirouettes in bondage - then break free to play keyboards and writhe on the floor some more.

What he actually looks like remains a mystery. Just meters away, I could only perceive a blur of movement and sopping hair. I'm surprised that he didn't collapse.

A sample clip from their show is below. Click here to hear the BBC radio documentary, "A year living in the pockets of iForward Russia!"