Like a bear in a cave, but with sun

I moved to Paris in August, four summers ago, when everything in the city was closed. 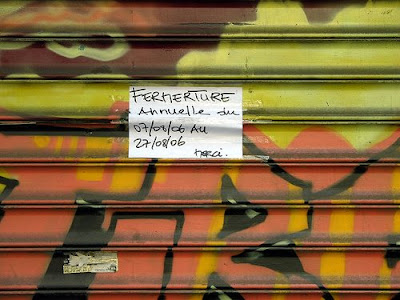 Those impressionable weeks were spent shopping at Ed* and wondering what treasures lay behind the metal gates pulled over every window. I scanned the empty sidewalks and began to worry that Paris really was, as certain friends had warned me, a dead town.

And then a few weeks later, everything changed. The shops on my street reopened revealing cheese and baguette where before there were none. Paris wasn't dead, it had simply been sleeping.

I am currently bracing myself for the city's annual coma, and knowing the drill doesn't make it any easier. My butcher called it quits on Saturday, and today my favorite market vendor said goodbye.

I find the latter departure the most difficult to accept - there's something cruel about a farm stand closing during the most plentiful season. "But what will happen to all the basil?!" I cried to my usual vegetable lady. She stared at me blankly and backed slowly away.

Having cleaned them out of fresh herbs, I am now cooking and freezing as if for a war and padding my shelves for the enforced hibernation.

My only consolation is that, like a bear, I can anticipate burning through several layers of fat during this time of nothing-to-eat. September will find me slimmer and crankier - ever nearer to my goal of integration.
--
*Ed stands for Épicerie Discount and serves as the French version of ALDI. After three misspent years I learned the correct pronunciation (euh-day), but it will always be Eddie to me.

The Opposite of Nirvana

Behold the world premiere video from the hottest band to come out of (Benoît's apartment in) Paris... we are Les Moquettes!

I believe the french term is pitoyable.

I've just returned from a holiday spent cycling through the Haut-Médoc - a peninsula that produces Pauillac wines, a surprising amount of pizza, and in this case, a sweet tan.

I will tell you about it shortly, but first have to get this out of my system:

I'm sure you're a lovely person. Being from Kansas, I'm obliged to offer that, and to apologize in advance for not being nice. That's how we tumbleweeds roll, especially when addressing anyone from New York.

An added drop of humility can be a good thing.

The question always in the back of my mind - "am I really qualified to say this?" - prevents me from doing things like, say, writing an article that pronounces Paris to be dead, creatively speaking, without appearing to have ever left the boulevard Saint-Germain-des-Prés.

Dinaw, and those who will follow you, I beg: no more Flore, pas des Deux Magots. There's nothing to see here, please move along.

The scene that you came looking for happened sixty years ago. That moment, and those people, are now dead. Their children - those who were inspired by and learned to make money off that moment - are now talking, as the elderly do, about how things just aren't the same. Saint-Germain-des-Prés is, in effect, a retirement community with very expensive coffee. It is not (did you really not know this?) what you were looking for.

I have a new friend who recently arrived from New York. A clever writer and musician type, she is, I suppose, the sort of person you were looking to find. I was sitting with her and another writer friend (does that make it a scene?) on a roof-top terrace in the 20th, when she admitted that her new apartment would be over there, in the 7th, at the border of Saint-Germain.

We smiled and tried to be supportive, suggested some good markets, assured her that it wouldn't be "so bad." The truth, however, is that nobody very few people doing anything interesting live over there. And what's more, the "anything interesting" taking place these days doesn't look exactly like it did sixty years ago.

But as I said, I'm sure you're a lovely person who, like Adam Gopnik before you, just didn't know where to go.

The root of all obesity

This morning I'd like to break a seal of sorts and take a moment to mock my French boyfriend. He doesn't read the blog so this will be our little secret.

An entire series could spring from the unintentional smut that sometimes falls from his mouth - the happy accidents that arise from the difficulty of certain sounds.

The majority are related to the aspirated 'h' that many French add, unnecessarily, to English words that begin with 'a'.

To illustrate: Once, as we were stolling along the Bassin de la Villette, he offered to "rent us a rowboat, along with some hoars."

This happens all the time.

And it brings me so much amusement that I have adopted, in some cases, his particular pronunciations. I will ask him with a straight face to take me in his harms, or if my hass looks okay in certain pants.

But my all-time-favorite has nothing to do with the aspirated 'h'. It revolves instead around a preferred spread, and its French designation as Evil. Dorie Greenspan addressed this recently on her blog when she noted that,

"French children never get peanut-butter because their parents are convinced it's the root of all obesity."

The boyfriend looks bemused whenever I bring out my overpriced jar of peanut butter. He watches me uncomfortably as I spread the stuff on bread, as if I were wiping boogers on the sofa.

And then he asks me every time, inverting the word order and fatally omitting the last 't',

I have never corrected him, and have in fact doubled my consumption just to hear him mispronounce it. I suppose this means, in a roundabout way, that the French parents are right.