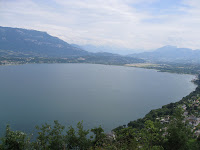 I have just returned from a weekend in the French countryside.

There is no internet in the French countryside, and very little spoken English. One is therefore forced to "relax," away from the computer, usually through HOURS of conversation.

Have I mentioned that I don't love French Meg?

French Meg smiles and nods a lot. She also laughs on cue. There are times when French Meg understands what you say, but she won't ask a single question. You may have covered that point already, and she probably already laughed.

Not only am I a bit slow, I am indiscretely so. At 5'10'', I'm only slightly taller than average when playing on the home court. In France, however, I am walking talking circus show.

The result is that, in addition to babbling and smiling, I am often dressed kinda funny. It's not always my fault.

This weekend, the countryside hostess offered to lend me her slippers. I pantomimed something like "I don't think they fit!" looking at first disappointed, then smiling enormously. 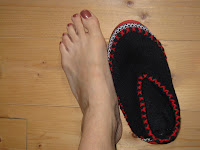 She suggested that I just wear them over my toes, and I was unable to respond with anything other than a smile. I spent the next two days mincing around in her elfinwear, falling down (two times), and smiling.

Outside the chalet, her XS parka hit me just below the bra line. Even the mountain sheep were rolling their eyes. "It's cropped," I gestured in return, grinning madly the whole time.

My finest performance of the weekend can't be blamed on size. It came one night when I was too tired to climb the stairs for toothpaste, and instead started fishing around in the hosts' bathroom drawers.

Do I even need to type this? It's really too predictable...

I used their Fixodent.

It was exactly as you imagine.

And yet I kept on smiling, even with globs of waxy red stuff stuck in my gums.

Upon leaving, my soft-spoken host raised himself up to faire les bises and to say his parting words.

At least I think that's what he said.

For a different take on The Language Problem, please click on the veryfunny following from Paris blogger Kung Fu Dana.

Did you come back relaxed though? I am sometimes forced to do the nod, smile, ha ha, too. And I'm alright with it.

I can relate to this in so many ways...

If you think French Meg is not the sharpest tool in the shed, you should have met American corine. She had the IQ of a squirrel and a plastered smile that was painful to look at. People had to speak really loudly in her ear and make hand gestures. And this lasted years.

Did you play petanque? That's wildly popular for the French in the countryside.

Oh no. Fixodent. Please tell me at least that your teeth didn't stick together!

In the mountains, I think that petanque would qualify as as an Xtreme sort of sport, so not this weekend!

The teeth didn't exactly stick together, they just looked as if I had brushed them with red candle wax. Très joile!

Haha... I love the French obsession with slippers. My French host family were absolutely AGHAST that I walked around the house barefoot. They thought I was going to get pneumonia. Fast forward to the French girl coming to stay at my house and realizing that in the summer, not only do I go barefoot in the house, I also bike barefoot, walk around barefoot and basically only throw on a pair of flip flops to walk into a store.

I completely sympathize with the "smile and nod." I've perfected looking interested while actually singing songs in my head.

I (heart) French Meg and Kung Fu Dana from the egocentric place of 'French' Jess.

You gotta go on some more week ends on the countryside in order to practice!
Slippers, it's definately french, yeah!

Any bloody wonder why kungfudana has no comments?

"mincing around in her elfinwear" - most magnificent blog line i think i have ever read. it just made my day - no - my month. i am grinning madly.

I also (at 5'9") feel like a giant here! Do you find yourself knocking knees with everyone on the metro?