A "temoine" is not really a bridesmaid.

She's just a witness who needs to bring her passport to City Hall to sign something in French that she doesn't understand. Working backward, she needs to for once be on time, pick up flowers, and wake up...preferably not hung over.

It's not a big role by most people's definition. But because I so adore this friend (and am by nature a leader of rings), I have expanded the role of "temoine" to include party catering, guest DJing, and Hen Night Bringer of Shame.

The latter role was executed several weekends ago in London. The Brits had amassed on that side of the Channel for what Cath had hoped would be a stately affair. She'd even arranged the thing in Notting Hill (the London equivalent of Saint-Germain?) to decrease the overall odds of lewd behavior.

Little did she know that I had crossed into her territory with a sack full of props and no love for her dignity. And so while Cath's university friend was distracting her with shots, the assembled hens (several men included) were donning feather boas and bribing some Dutch boys to strip.

That's about all I can reveal, except to say that once the squealing died down, she really seemed to enjoy it. 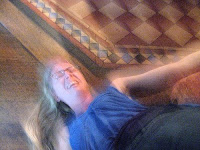 Whether she remembers any of it is another question...

One task down, then, and two to go.

For my music playlist, I've been instructed to "lay off the obscure indie crap," which leaves...? (I'll get back to you)

For the food, she has advised me to "be reasonable," i.e. choose 2-3 items instead of 12 to avoid spending the entire party in the kitchen.

Because someone's gotta be out there keeping an eye on that bride. I only wonder who will watch over me?

(more Hen Night photo evidence can be found over here)

Obscure indie *crap*? I'm outraged. Cath has the hippest DJ south of the English Channel at her service, and she's wasting her...