Tout nu or not to nude? 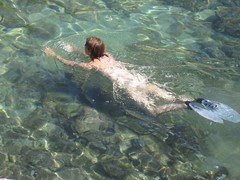 That is the question.

Whether t'is nobler in the mind to suffer the stings and stares of jellyfish and fellow swimmers while clothed, or to bare arms and legs against a sea of turquoise...

Hamlet, remember, was European. One can deduce, then, that he had no problem exposing his (royal) family jewels while on vacation.

For an ameriçaine, however, going natural is anything but. And thus I found myself recently wrestling with the question along the crystal blue waters of Naked Cove. A secluded spot on the southern tip of Istria, we found this place following a vigorous bike ride past the tourist hordes through pine stands and berry-laden brush.

Our group, composed of 2 Americans and 2 Europeans, had discussed this on the previous day. "You will see me naked in Croatia," said the Austrian, his tone carrying a finality that promised no escape. True to his word, Bernhard was the first among us to doff his drawers, splashing into the sea in the way that God intended. This reasssured the naked Slavs who had been eyeing us warily from their spot several hundred meters to the right. Upon seeing genitalia they returned to smoking and playing with their dog.

I, meanwhile, was warily eyeing my toes. And everything north of them, egad. Was I really qualified for this?

"Americans believe that nakedness is sexual," Bernhard told me. Yes and no. Americans believe in the perfectability of the body. And every freckle and roll is a reminder that we have not worked hard enough, will not be going to heaven, and deserve neither sex nor sunshine. Whether this reminder is personal or shared depends on the alcohol available.

Fueled only by lemonade, I was taking a particularly long time with my bikini.

It was the only child in me, the competitive one who tries to out-cliff jump the boys, who won out in the end. There was no way I was going to be left behind on the safe and sexless shore. So I dropped them. And then ran like hell into the protective waters of the Adriatic.

Hours later, after seeing my scraped and sunburned companions pulling themselves gracelessly over sharp rocks, I too settled into a state of corporal indifference. I put on my flippers and mask, and set out for some naked snorkeling.

Which, it turns out, is better than heaven.

Americans believe in the perfectability of the body. And every freckle and roll is a reminder that we have not worked hard enough, will not be going to heaven, and deserve neither sex nor sunshine.

indeed, you are the most astute american cultural studician to have swum euro-style in your nuddie pants. i lapped up your brilliant post with glee and a smirky office-desk-seated giggle.

Le meg, finally with the nudity! I'm so impressed.
'Tis the croats bring it out in anybody.

Oh and you got it wrong, bab: ...for an americaine, going natural is anything butt!

Yay for nude swimming! I love skinny dipping but I also hate that moment between disrobing and being totally immersed in the water so no one can see my mermaid fins.

Excellent post. I remember my shock at seeing bikinis on the beach when I first got to Europe. In N. America, I always thought that bikinis were for the perfect bodies. In Europe I learned that they are for every body.

Sometimes the body in question could use some work, but whatever.

I started at the SCUBA club with my normal swim suit, and they told me that only speedos were permitted (for "hygienic" reasons). It took a bit of courage to put them on in public for the first few minutes, but it really doesn't make any difference when everyone is wearing the same thing regardless of their body type.

I have to imagine that it's much the same when everyone is NOT wearing the same thing...

it was a surprise to me, when i was shopping for a bikini at the dept store, to see that someone's grandmother 70 was examining the exact same one. other people's grandmothers were looking at other bikinis.

it's so true, your take on nudity in america.

As I am living relatively short distance to several nude beaches near lakes around my site, go swimming for me means swim naked, that's natural. Wearing swimming suite for me is like wearing tuxedo :-). However spending my holiday this year snorkeling naked all week in Croatia was a completely new experience. A challenging experience of absolute freedom, something mystic is there, like to be close to the gods ... I know, I am pathetic a bit :-).

sf girl i am surprised... when i was living in bay area i found it more difficult to find a nice clothed beach than optional one... I almost always assumed a "can't beat em join em" mentality...

there are some wonderful beaches like this in sf, like right beside the golden gate! youve just gotta look

i haven't, however, ever partaken of the skinnydipping arts while in France. This must change, hear hear

As an american i can see why we (americans) are so inhibereated with
sex and nudism part of the repressed
way of life, but naturist and sex are two different things. Thankfully
that the euroeapons have kept the true meanining of nudism alive.