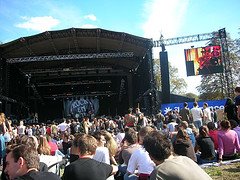 It’s been well over a decade since I’ve found myself at a music festival. I’m not counting South by Southwest, the showcase that blooms annually between the hay bales and BBQ pits of dozens of Austin, TX bars and restaurants. I’m talking rock en masse, or in this case, Rock-en-Seine.

My last festival was probably HORDE - or something similar at which I could, with approving looks, perform the dirty hippie dance that was all the rage among middle-class college kids in the early 90s.

Imagine my surprise, then, to see this and this yesterday. Where were the hemp bracelets? Where was the falling down behavior? To be fair, not all attendees at Rock-en-Seine were wearing scarves and pantyhose. The British were also there.

Beyond fashion, here are some observations about French music festivals, based on a statistically representative sample of one:

1. Bands are selected based on their ability to pull Londoners and/or perform crowd banter in French. How else can we justify the presence of Kasabian and Nada Surf?

2. Morrissey is bored. Clap Your Hands Say Yeah are delightful. This is not particular to France, but very true.

3. French people do not scream “Whooooo!” like I do. “Whoo hooo hooOO!!!” How else am I supposed to get Alec Ounsworth to notice me?

4. The refreshment options at French festivals are superior. There was virtually no waiting in line for a 3 euro Heineken or a 5 euro grilled sausage topped with onions sautéed in white wine. This enabled the consumption of five pints and 3000 calories over seven hours.

5. Trying to squeeze 20,000 drunk concert-goers into one Métro station is a bad idea. It’s perhaps better than sending them into their cars, but still TERRIFYING.

In conclusion, 40 euros to see Clap Your Hands (Morrissey excluded for not playing my favorite songs) is too much. I think I’ll stick to the smaller clubs from now on.

Speaking of which, here are some upcoming September shows to consider:

Niki and I once had a drink with alec. Oh, it's true! This is why we are on a first-name basis.

please, please, PLEASE tell whoever made that sausage to stop putting the fries (those ain't frites, so no corrections anyone!) in the bun with the sausage!!
BOOO!!!