A blog is a good enough excuse to track down your high school boyfriend, engage in some catch-up, and then pose the burning question.

BJH and I went out during our senior year. This "going" was conducted primarily on the phone, although I do recall one driveway makeout session with Elton John playing on the car stereo. 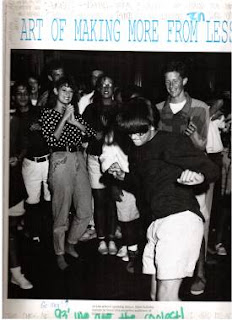 As blissful as that might sound, BJH was less content with our direction. He ended things after a few short weeks, I suspect because of these pants* =>

A high waist, double rolls, and one very hot pocket - my jeans must have... intimidated him.

In any case, it wasn't fashion that we discussed after fifteen years. It was the dog.

In many cultures the artistic representation of the erect penis, also known as a phallus, represents power, wealth, and good health. The concept of the phallus is often connected with being the ultimate man, and possessing said phallus is compared to having the divine gift of God.
The dog has long been known as "Man's Best Friend," and symbolically represents undying love and loyalty. The union of starving dog and phallus under fire represents teenage misanthropic angst in conjunction with an overwhelming desire to deconstruct the norms of an impersonal, omnipotent society bereft of love.

Either that or BJH thought it was funny and cool. BJH can't remember exactly.

So there you have it, Commenter #8 - a fine answer from BJH. But while we have him on the line... are there any other questions for high school boyfriend? 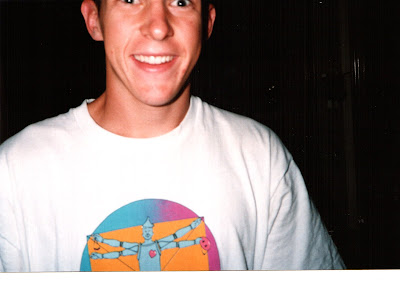 * 'pants' in the American sense.

Meg, this is getting embarrassing, again I am the first to comment. Please excuse me, I'm not stalking you, I just happen to be sitting in front of my computer rather a lot.

That said, BJH seems a clever and wise lad, considering his answer about the dog and his phallus, so I have a question I'd like him to answer;

Why, oh why do triangular sandwiches always taste better than square ones?

Is there another, non-American sense to pants? Maybe BJH can tell me that.

What kind of music was BJH listening to in 1992? Surely not that Elton John crap...

First time visitor and I will be stopping back because this blog seems all shades of awesome.

I'd personally like to know the story behind the Vitruvian Tinman featured on BJH's sweatshirt.

I believe BJH was listening to some Fugazi or Nero basement recordings. I had a pair of those jeans too........