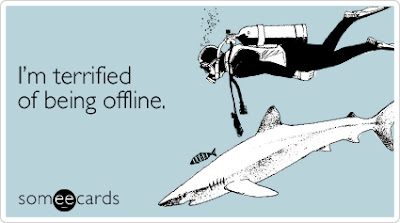 It was 1998 when I had my first and only internet fling.

Back then, the only way that people seemed to interact on the web was in "chat rooms." These were dark and awful places which, according to the local news, were full of sweaty old men trying to pick unripe peaches.

I didn't want any audience for our "how did you meet?" story to think we had sullied ourselves in some virtual disco. Our first encounter was respectable - in the flesh and broad daylight.

Yet any courtship that involves the frantic refreshing of a browser is bound to breed suspicion among the Luddites.

My exclamations about email failed to conjure for my friends any of the old-fashioned romance of letters. To the contrary, they spurred tense smiles and the worry that perhaps I was projecting.

"She's headed for a fall," some of the eyebrows seemed to say. "I give it six months."

Whatever bounce my words have on-screen is padded in reality by a lot of "buhhhh?"

And when sitting across from a new flame, one who's been lured by fancy typing, every spot of faltering speech feels like a flare. Every "ummmm..." is another shot into the sky, a distress signal to illuminate the disappointing reality.

Case in Point: I just searched for and found another word for "inarticulate."

Exhibit B: I then typed "point in case."

The only solution is to drink. And to find other outlets and ways to impress.

Like learning to cook, for example. Or playing the banjo. Or perfecting one's already impressive range of monkey sounds.

Because once you're living with the boy, there's really no point in writing anymore.

a spider, that's what you are, le meg: weaving words like webs, until you catch your prey - where is he now? conspicuous by his absence, I say. no doubt half-nibbled and discarded in some corner of your web! I dare say I could have easily followed a similar fate...

I have been an avid reader of your blog since I left Paris 6 months ago after a tumultuous 8 years. Every few days I dip into your blog to spend a few minutes living in Paris as an Anglophone again, and my reading inevitably results in me snorting with laughter at least once. Thanks for keeping me entertained.
Laura

Love the graphic (and oh...how true!)